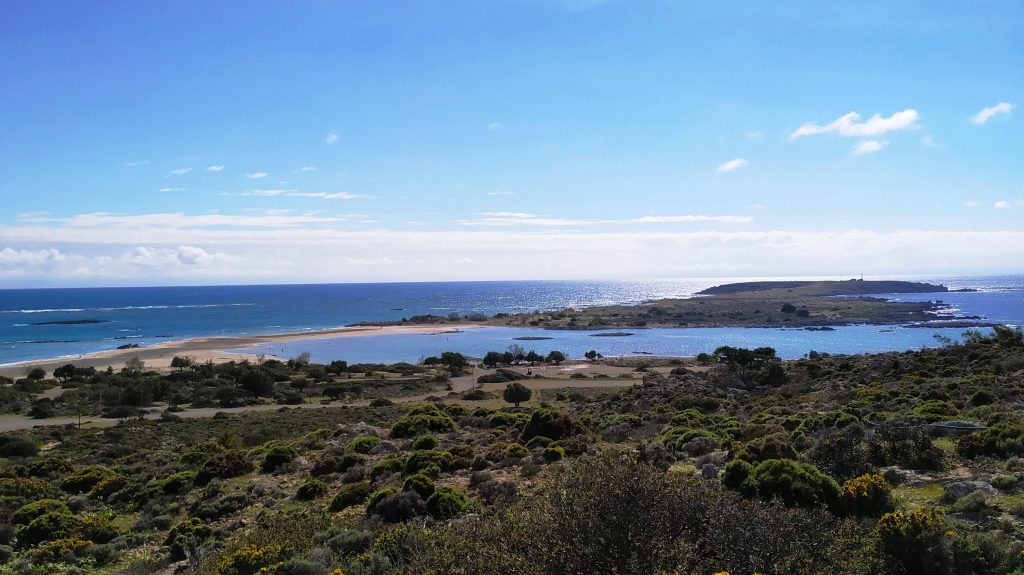 Elafonissi is located 76 km west of Chania and 5 km south of Chrysoskalitisa Monastery, in the south western, most tip of Crete. Elafonissi is an oblong peninsula, which often breaks in two parts by water giving the impression of being a separate island. Elafonissi is a “Natura 2000” protected area. The island is full of sand dunes with sea daffodils and junipers. The endangered loggerhead sea turtle and several more rare animals and plants find shelter on the island; it is strictly forbidden to remove any plants, animals, shells and sand from the area.

Exotic beaches with white sand and turquoise water, reminding of the Caribbean, are formed on either sides of the peninsula. The sand is pinkish in many places, taking its color from millions of crushed shells. Near the breaking point of the peninsula, the sea water does not exceed 1 m in depth, creating a small lagoon, ideal for children. You can easily cross the lagoon in order to reach the opposite site of the peninsula, while carrying your staff with you, because the water is very shallow there. 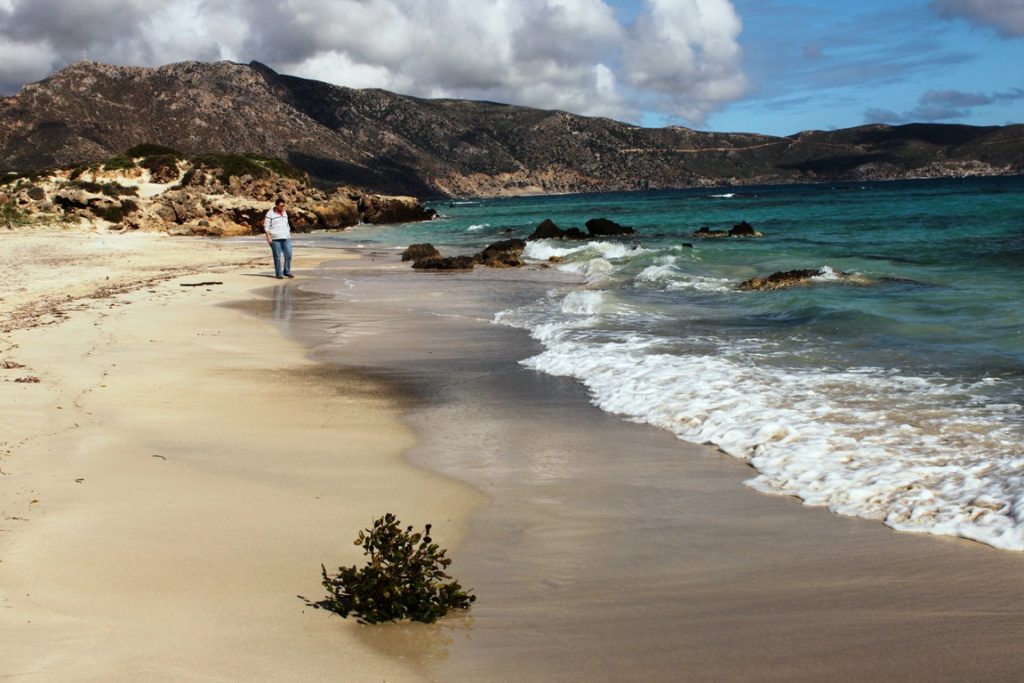 The eastern side of the beach, in front of the lagoon, is well organized and has the most people. There are umbrellas, showers, lifeguards, snack bars and changing rooms. Also, near the beach there is a huge area for parking and, even further, a few rooms to let. Opposedly, the beaches on either sides of the island are less crowded and are the most beautiful, with amazing azure colors. If you want to stay completely secluded or nude, you can walk along the peninsula until you find a quiet cove that you like! There are some coves available for naturists near the west end of the peninsula.

You can come by car (1.5 hours) or by bus from Chania. The road to Elafonissi is narrow and full of turns, but the beauty of the landscape is stunning; you will cross the beautiful lush green village Elos and the imposing gorge of Topolia. Moreover there are many options for accommodation at Chrisoskalitissa village, 5 km to the north. You can eat at Chrissoskalitissa or at Elos (on the way back to Chania).

The island’s history goes back in the ancient times, when the ancient Greeks built a temple dedicated to Mousagetis Apollo on the islet of Mousagores (today’s Elafonissi). Mousagetis means the lord of the Musses (Greek deities), who with their music calmed down the marine deities and the wavy sea. Opposite the islets, there was the temple of Ino, the daughter of Kadmos. 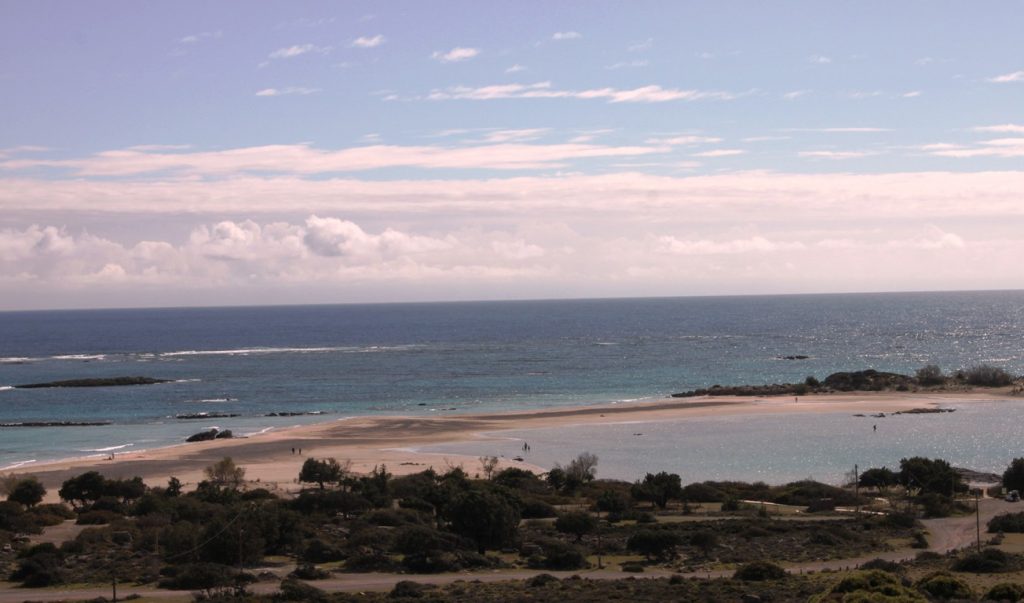 The island was once occupied by pirates, but now it attracts thousands of visitors. This is reflected in the name of the island. Elafonissi means “Treasure island” in Greek, named after the treasures that pirates stored here. Who knows, maybe you’ll be lucky to find a hidden treasure when you come here.

Near the parking area, you will see a monument. It is there to commemorate a tragic story that took place in Elafonissi in the Easter of 1824. Turks, leaded by Ibrahem Pasha, massacred 600 women and children and 40 combatants, who had escaped in Elafonissi hoping that the Turks would not find the shallow passage to the islet. The Turks however found the passage by watching a donkey that was seeking for its master. After the massacre, they moved to Xotikospilio cave to continue their slaughter. 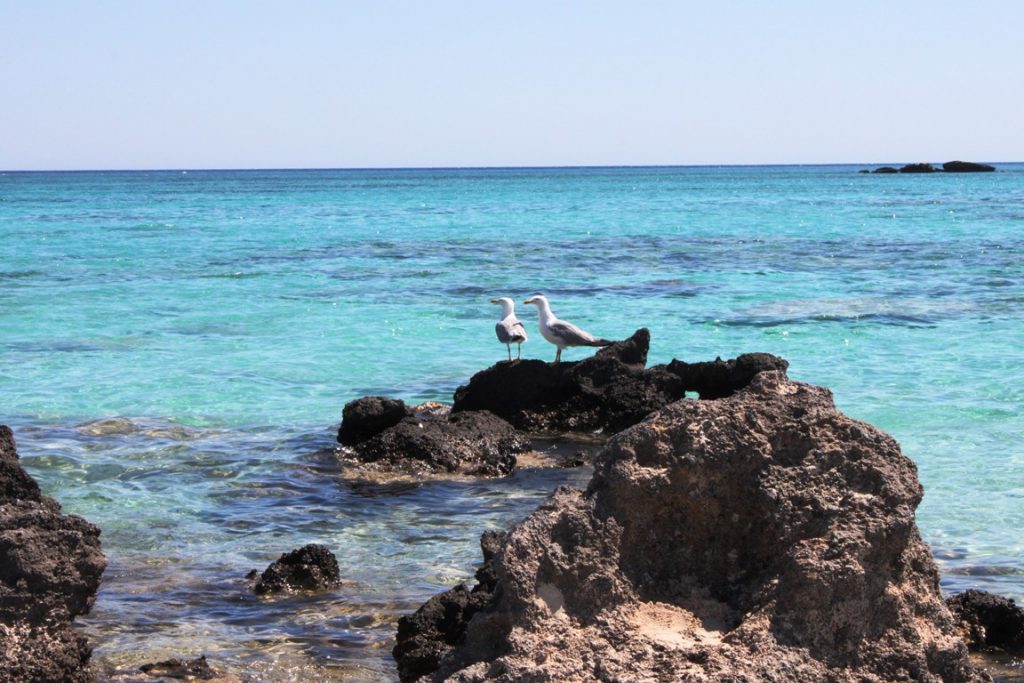 According to some reports, this number is 850 people, while many seem to be those that were sold as slaves. During the Revolution of 1866, the historic ship Arkadi that was used against the Turks by the rebels for years, was destroyed during a battle on August 7, 1867 near Elafonissi.

Strolling on the island definitely is worth the effort. You can trek for 20 minutes until the lighthouse on the edge of the island. The area is called Agia Irini (Santa Irene), after the picturesque chapel with the endless view to the sea. In order to get there, you walk through magnificent landscapes with dunes and beautiful coves. The current lighthouse in Agia Irini was built before the German occupation (1939) and was seen from 30 miles. There was a smaller lighthouse before, built after 1907. This was erected after the tragic sinking of the Austrian ship Imperatrix, in February 1907. 38 people were killed out of the 140 passengers. Their bodies were buried on the island. 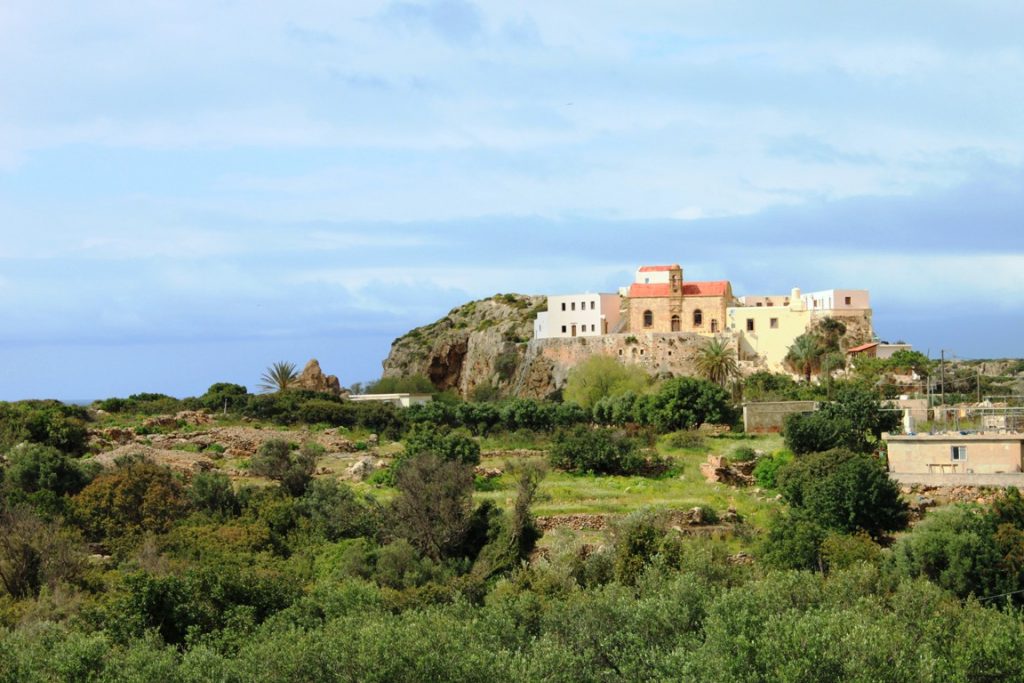 Lastly, 5 km north of Elafonissi, there is the Chrysoskalitisa monastery. This monastery has been built on a high rock and was fortified. According to the legend, the last step of the staircase leading to the monastery is golden, but can only be seen by those who really believe in god. 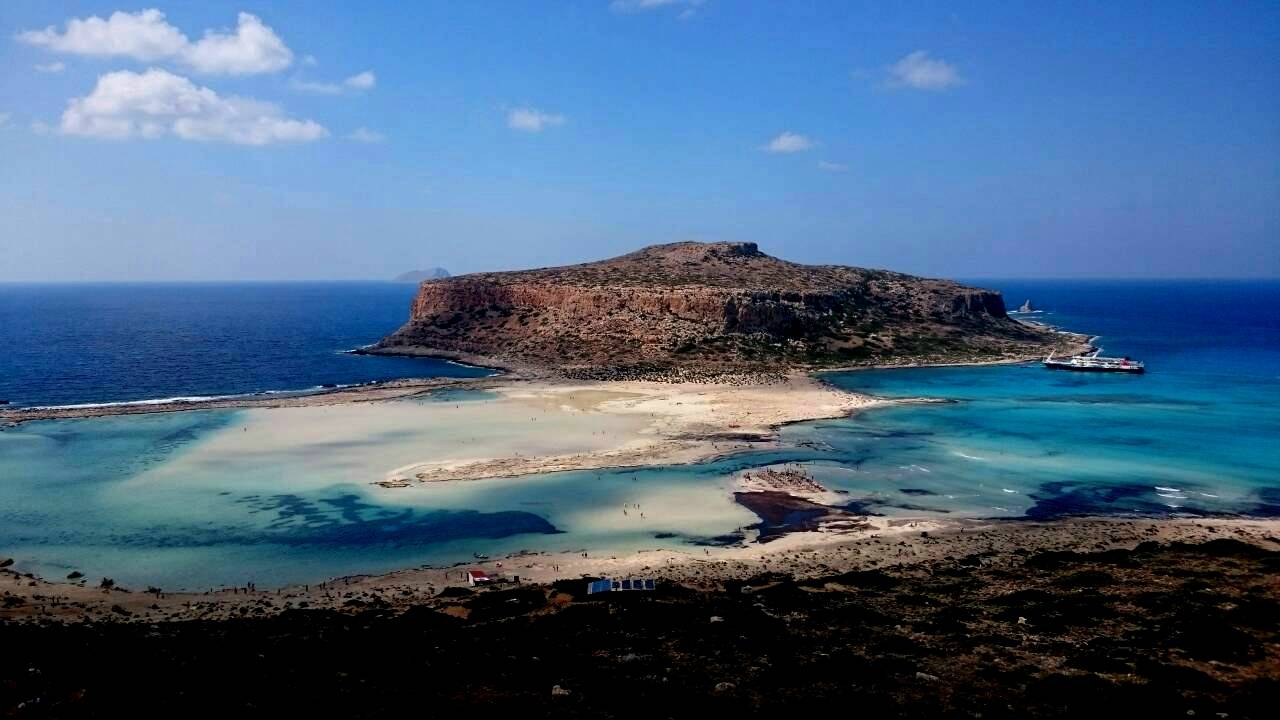 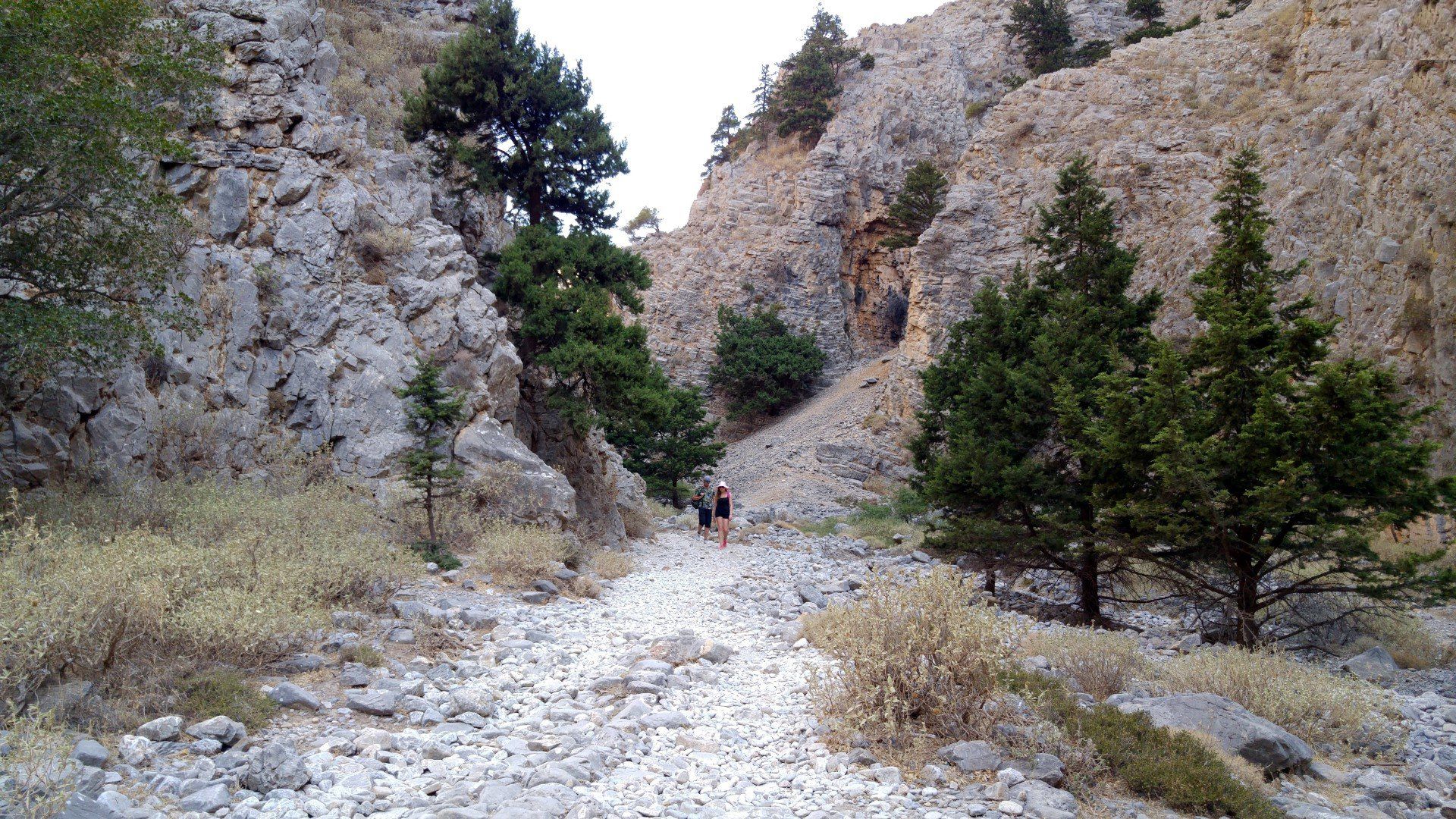